Vilvoorde is a very strategical area because of its geographic position near Brussel and Antwerp, which attracted many industrial activities.I decided to work on the Zenne, which is a river crossing Brussel and Vilvoorde along the canal. In my opinion it was impossible to understand the complexity of the challenges faced by the city without looking closely to the water cycle.

However, during the last centuries many human interventions were made on the Zenne.These changes altered the river shape through dredging, embanking and channelizing works. 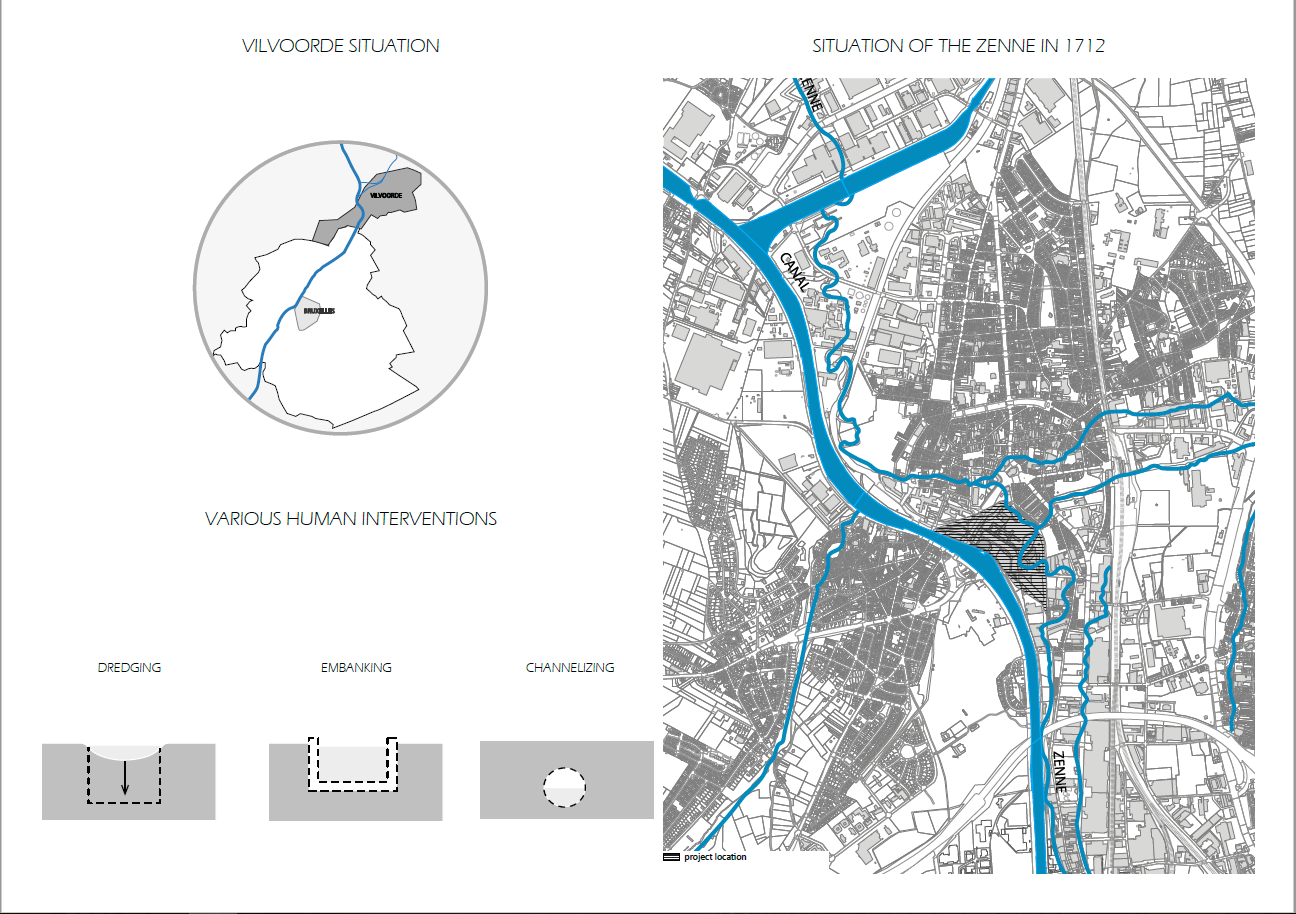 All these human interventions had a positive impact, for example:  Dredging the Zenne was a way to facilitate the shipping and to increase the riverbed capacity.

The embankment was the perfect solution to secure the banks and to allow houses to be built closer to the river. In addition more spaces were allocated to agriculture and floods were better prevented.

It is also important to point out that in the 19th century, slums were responsible for many deaths because of the diseases that existed in those places. The rivers were at that time open-air sewers. By channelling them, we could hide the dirt and the bacteria sources, clean the street and gain space.

However all these interventions have a bad impact on the environment. Burying the river dramatically lowers the amount of plants, which were producing the oxygen in the water. Furthermore, the more geometrical shape of the river increases the speed of the water flow. If the water runs quicker, the erosion increases which lead to a deeper riverbed. The embankment also participates to destroy the water connections in the wet areas.
To sum up all these actions represent deathly threats to the biodiversity and the channelling of the Zenne with concrete results in a rigid and lifeless river. 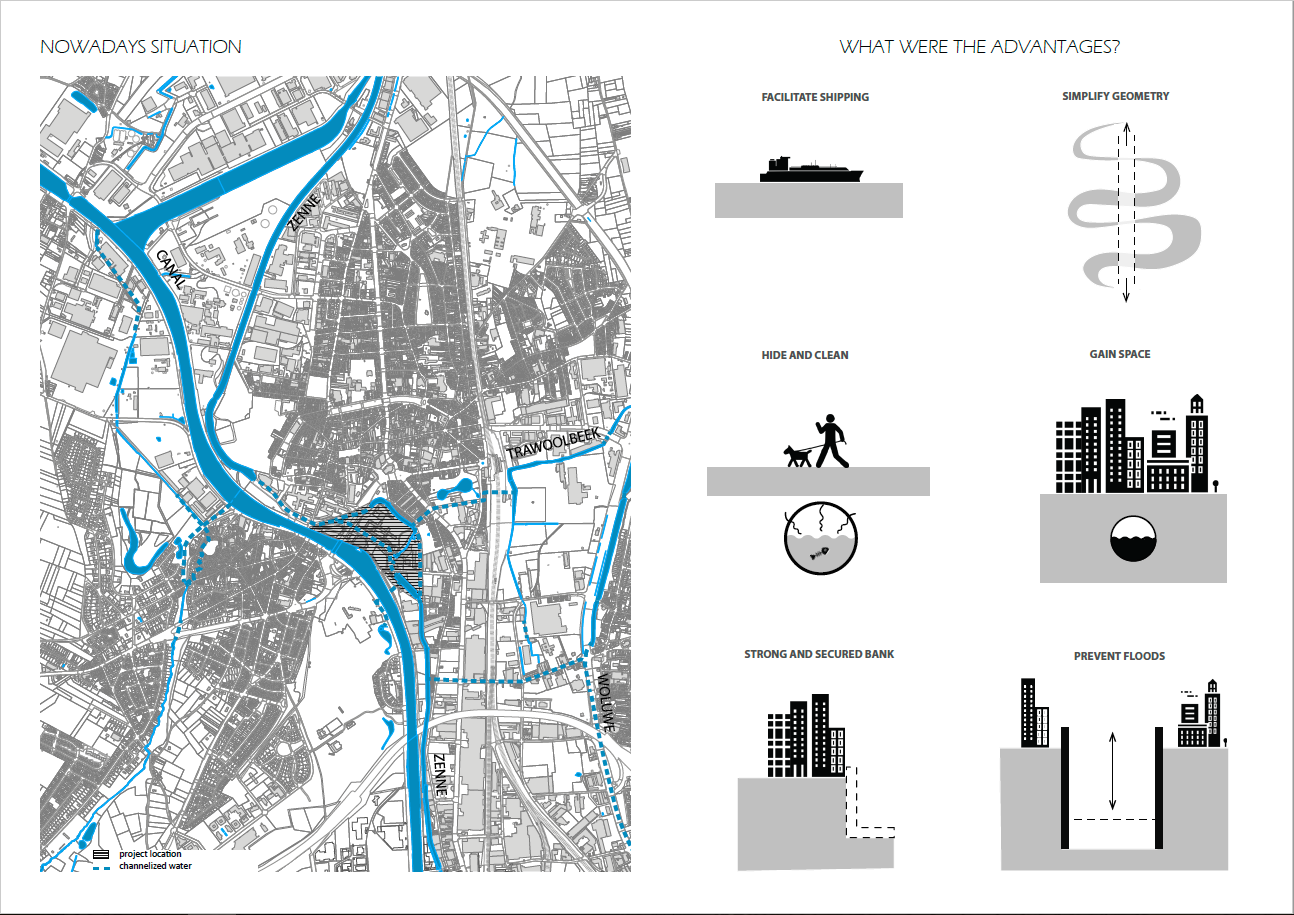 Despite the environmental impact of the channelization, Vilvoore is facing other challenges.

The population is growing, industries are more and more developing, which lead to a strong increase of pollution and wastewater. These factors have a direct impact on the zenne.

It’s important to notice that the soil and the underground water are also polluted in Vilvoorde because of the industrial activities.

There are many reasons why the Zenne is polluted, for example sewer overflowing during rainy days, atmospheric pollution, rainwater in contact with polluted ground or roads.

Of course, these water are treated locally and in big facilities like the Acquiris station.

But even if these treatments aren’t efficient and sufficient yet, to produce pure and clean water in the zenne. Brussels has a very ambitious project right now about water management that will globally help to solve this issue 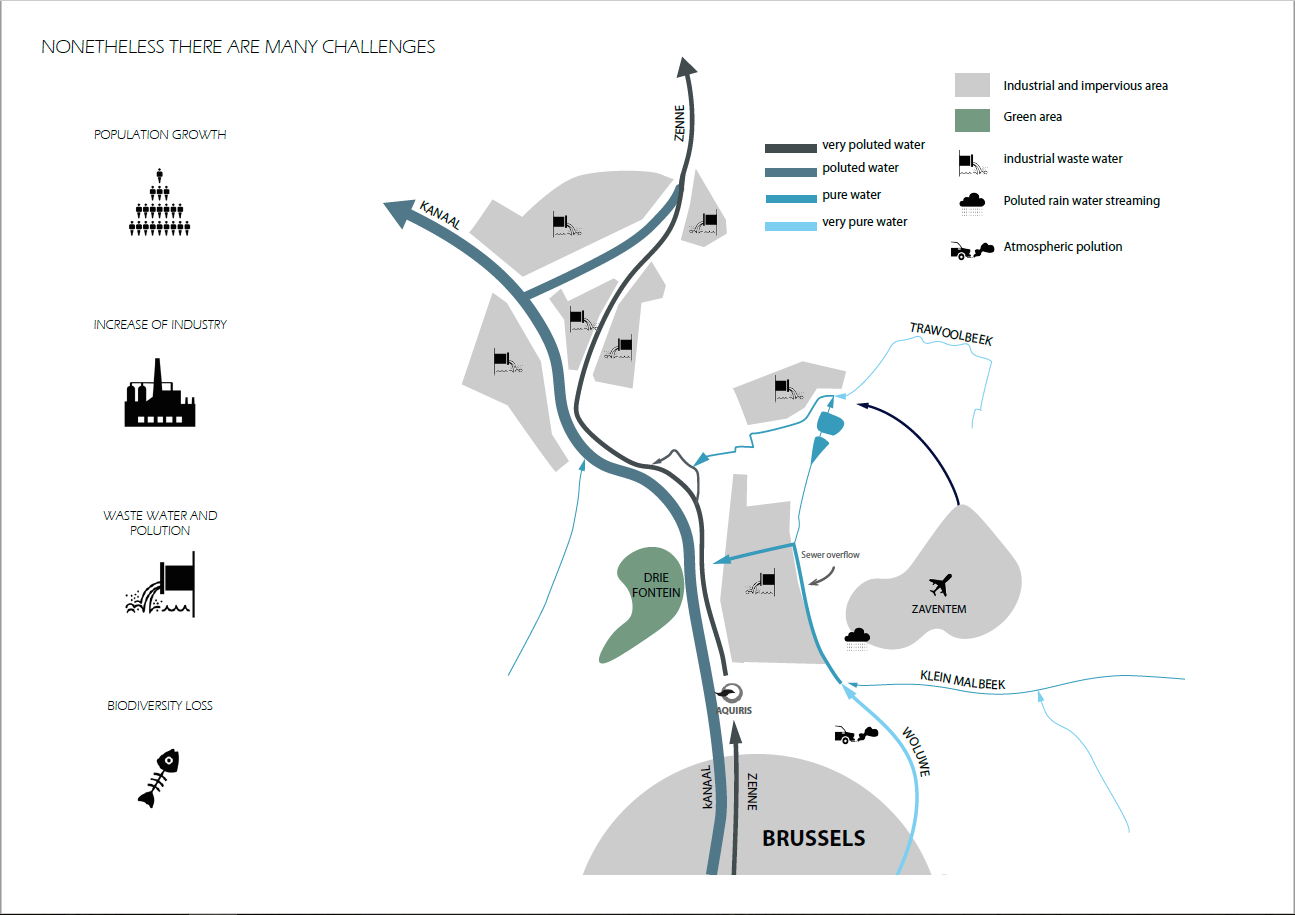 Another issue in Vilvoorde is the floods the entire city is actually on the flood plains of the river.

In addition, the increasing number of impermeable surfaces  is directly responsible for floods because it prevents water infiltration and water retention. Moreover, global warming is increasing rainwater that leads to floods and a nauseous smell if the sewer are congested. 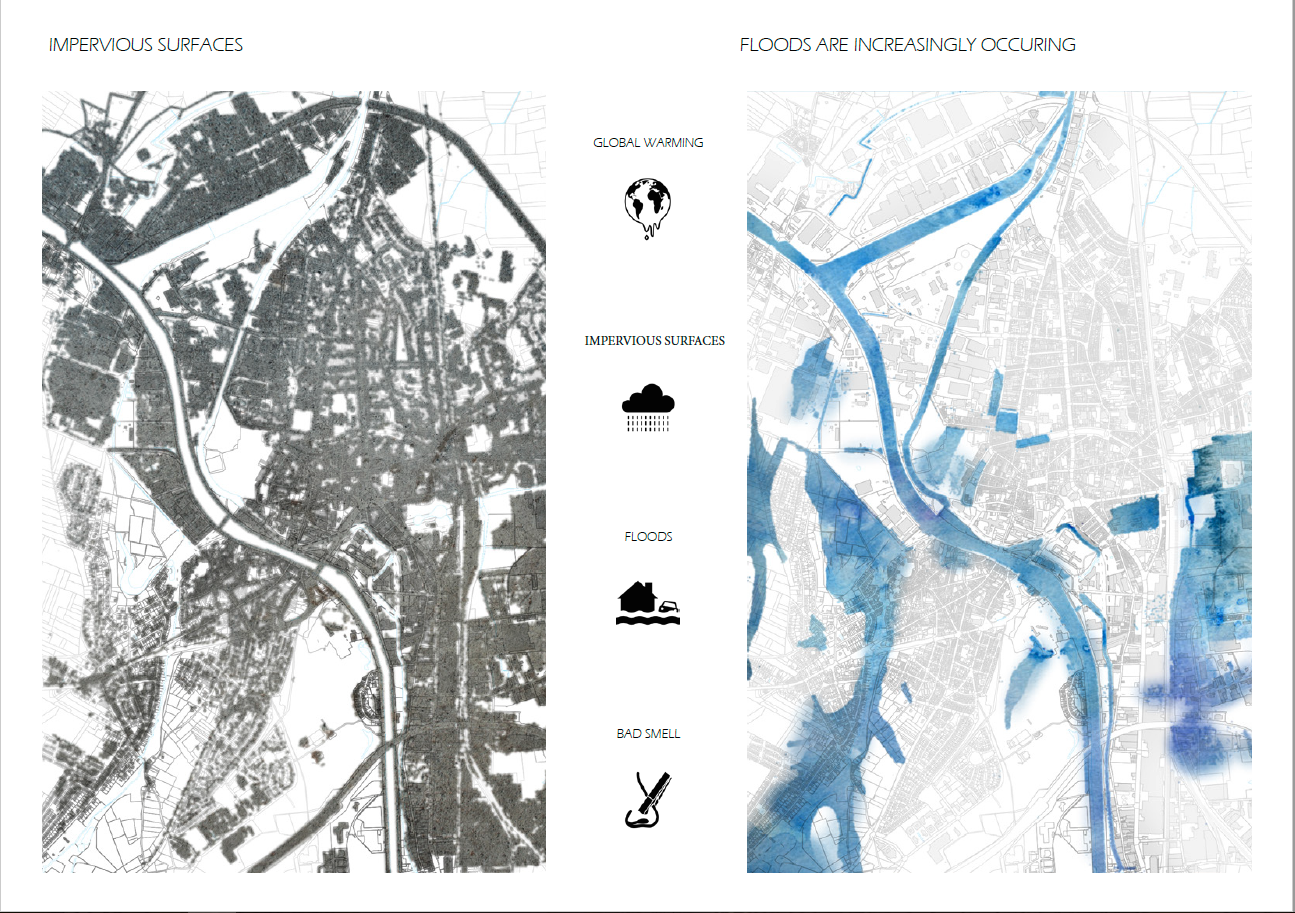 Here you can see the Yingzhou Central River in China, it is the perfect example of the kind of intervention I would like to peform on the Zenne. The Turenscape company has successfully transformed a channelized concrete, rigid and lifeless river into an eco-friendly, aesthetically pleasant and productive landscape.

By applying this alternative solution to an urbanized waterfront, the Zenne could provide multiple ecosystem services such as water treatment and regulation, air purification, production of energy and food, while entertaining the inhabitant and deeply enrich its biodiversity. 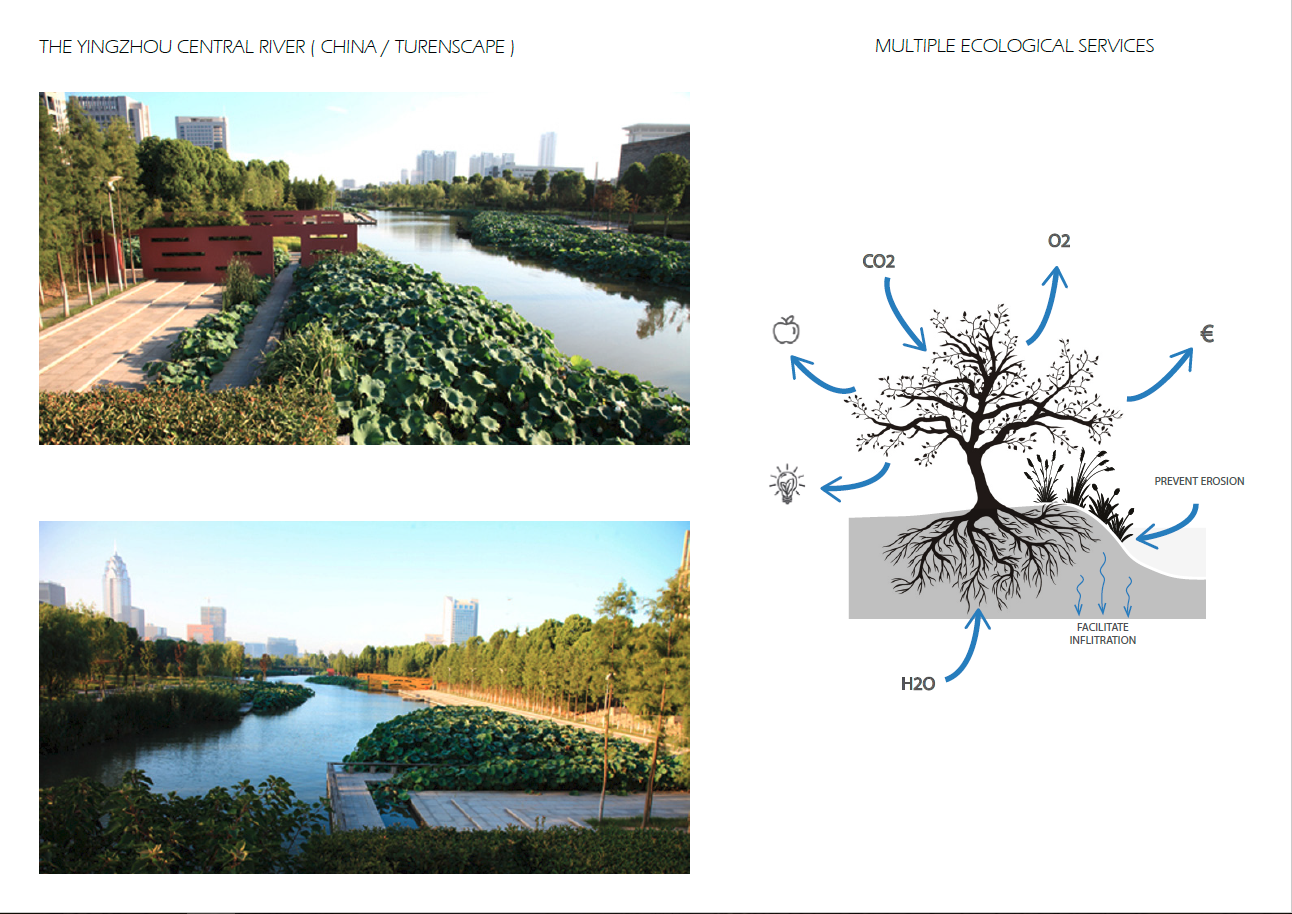 Naturalizing the zenne in a global approach would enable the creation of a water corridor in the open air to let fish migrate.

A green network of vegetation would enhanced this corridor by deeply developing the biodiversity.

These parks would spread along the river but also in other directions and meshed with a chain of paths and public spaces for pedestrians and cyclists.

Plants and microorganisms would purify the ground and water; this is what we call bioremediation.

Floods would be regulated because the water capacity of the river would be increased.

In addition the extended length of the river and the additional water retention capacity of plants would slow down the water.

To be more specific, I’m working on a precise area called Canal park. It’s located between the historical city centre and the industrial area.

You can see here more clearly the project proposition.

I hope to convert the zenne into a living ecosystem, with a pleasant park that could provide multiple ecosystem services and that would be along an existing bike highway next to the canal.

I wanted to put the cars outside this green area, but I didn’t want to disadvantage the companies that are located in the old prison. For instance, the firemen need a direct access to the city.

This is why I worked on a rational, minimalist but very efficient road system on the inside of the park. On the outside, each road is stopped before the park and end with a green parking, which has pervious surfaces.

This is a very important detail in the water regulation process, because it increases the water infiltration of the ground.

Keeping the existing function in the buildings of the canal park seemed imperative to me, because it makes this area more dynamic. I tried to make these functions interact with the park by linking them with new ones.

The sport fields under the bridge will remain, because it’s an incredible meeting point for youngsters. Nevertheless, a real playground for the inhabitants’ children could be built next to the residential building and connected with the sport fields.

In addition, a vegetable garden could be added for the parents. The position of this vegetable garden is strategic because it’s not far from residential buildings and the university, it could attract some motivated student.

Of course, the park offers various paths that would allow workers, students and resident to walk freely and entertain themselves. However, specials areas would be allocated for picnics next to the old prison.

I’m now going to talk about the different paths of this project.

As you can see on this map, there are two networks of paths. One with the purpose of providing for the bikes a quick access to the highway and the other a more pleasant way along the river. Both of them will be accessible for pedestrians and cyclists.

I thought about different ways to make people interact with their surroundings. The paths could be immersed in the environment, or raised and distant. The walking corridors could also be stretched at some places to allow people to appropriate the space and sit on benches. 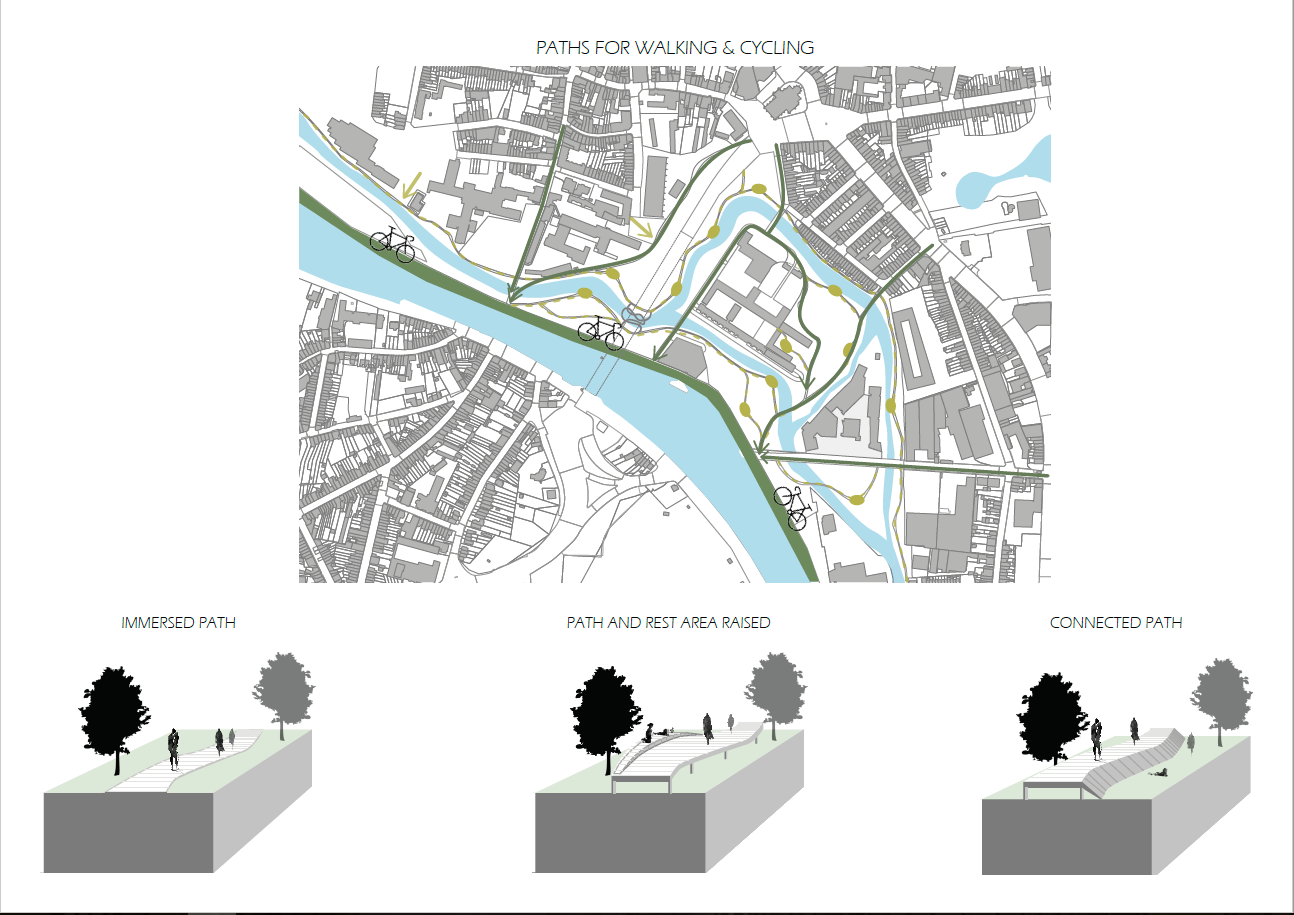 To conclude, I’m going to talk about the incredible opportunity that this project could bring on an ecological aspect.

Many new places for animal would be created, new pollinations areas but also nesting places for birds, bats and so on.

Offering various types of environment as forest, grassland forb, wet grassland and open water, is extremely beneficial for the biodiversity. In this section, you can see some of the animals for whom those changes could be very fruitful. 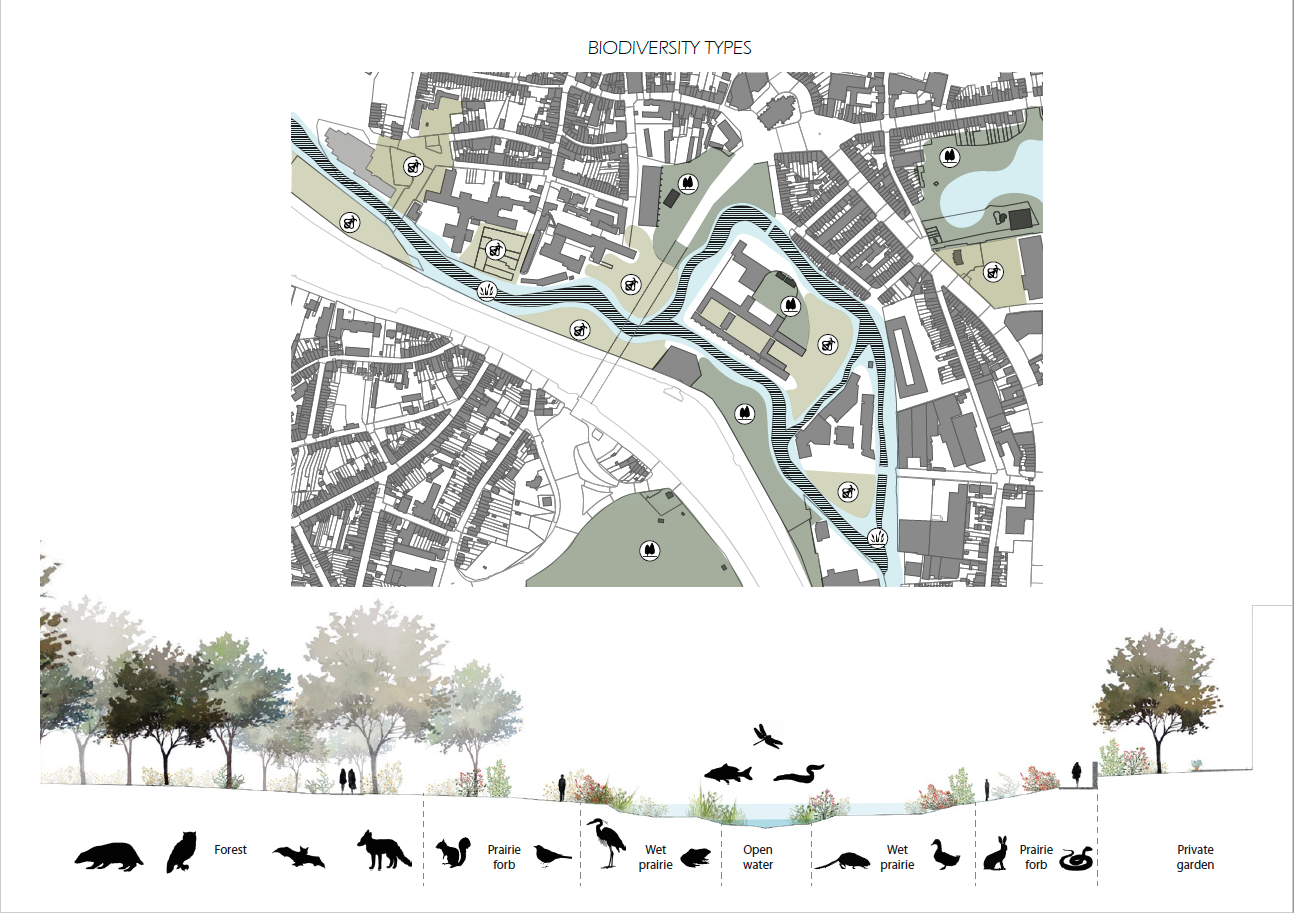