The Broek neighbourhood is located in the southern side of Vilvoorde, between the city center and the Buda area, adjoining the R0 ring road of Brussels and facing the Drie Fonteinen park. It is characterized by its longitudinal divisions: the canal, the Zenne, and the busy Schaarbeeklei axis along which the former Renault factories take place.

While the northern part of Broek is developing into a new residential area, the south of the neighbourhood is occupied mostly by factories, construction material retails and some company offices, convinced by the cheaper rent and the proximity to Brussels and other big cities. Broek is currently a transitioning zone, as attested by the presence of construction sites. Those construction sites are part of a masterplan for a new residential development for the neighbourhood, meaning that the number of inhabitants is going to increase in the upcoming years. Broek is intended to become a more dense and lively area.

Our society is already lead by mass consumption, but planned obsolescence brings us to buying more and more new products and throwing them out as soon as they do not work perfectly anymore – instead of repairing them.
Indeed, it has become more difficult to repair objects than to buy new ones: objects are more complex than ever, people do not have the necessary skills or tools to repair them, and most of the time it is very difficult to find replacement components.

It would be very difficult to make people stop buying things, but it is necessary to bring them solutions and help them “buy better”. There are already sharing or second-hand companies and collective initiatives, who reclaim used up objects and sell them to people in need (Les Petits Riens/Spullenhulp, RecyK, repair cafés, Usitoo…). But giving away and buying somehow belong to two separated worlds, and still many objects end up simply thrown out in landfills in developing countries, because it sometimes takes more specific skills and equipment to repair them. Yet, in Vilvoorde, and in the particular area of Broek, some companies are already active in the sector of recycling materials: NNOF (Nearly New Office Facilities), Umicore, Brussels Recycling Metals S.A. …

Moreover, such a project would be in the town’s interest of promoting Vilvoorde as a cutting-edge recycling city, giving it a more glamour, fashionable aspect.

Circular Economy : How to recycle materials ?

Following the example of the Swedish town of Eskilstuna, which has just opened the first shopping mall entirely dedicated to repaired and upcycled products, the idea is to bring together the acts of donating, repairing and buying, to make repairing easier and accessible, and to make circular economy and sustainability self-evident in consumers’ minds.
Working together with the currently existing companies, this all-in-one new centre would gather both a deposit station, repairing workshops and stores, in several fields : furniture, textile, bicycles, electronics, electrical appliances, lightning, decoration… The complex would gather local designers, artisans, mechanics and handymen into a meaningful, environmental and social mission, allowing people to participate in Do-It Yourself workshops. These aspects will be inspired by some existing associations, such as Hackerspace Brussels, or Maks (Cultureghem).

The recycling centre would lean on the competences of some existing enterprises.
For example, NNOF already recycles office furniture, papers, and equipments into new ones, but does not deal with housing furniture; but the centre would integrate workshops dedicated to home furniture.
Brussels Recycling Metals is a firm specialized in bigger scale metal items, whereas Umicore recycles, in a more detailed way, metals coming from electronic devices and jewellery. Those two companies companies would deal with the remaining metallic pieces which could not be reused in the workshops.

Such synergies will participate in fostering short cycles and economic chains based on proximity, via reusing materials coming from nearby areas. (In the same logic, some of the construction waste could even be used for building the complex itself…)
As for the other sectors (wood, plastic, textile), specific sorting and recycling workshops would be created inside the recycling shopping centre.

Some existing companies in Vilvoorde already deal with recycling issues, and would be interesting partners. For example :
– NNOF (Nearly New Office Facilities) and Your Mover help companies moving their offices and collects their old furniture or devices in order to redesign new ones.
– Umicore recycles and valorizes metallic waste (including precious metals) into new metallic items which can be used as building materials.
– Stallaert Recycling is a container park and extended its activities from construction waste to a more general waste management, including collecting, removal and recycling.
– CVB Ecologistics deals with collecting and recycling paper and plastics.

The new complex will settle on an underused parcel, benefiting from the presence of an abandoned hangar on the site.
There is currently a residential building under construction, and a new bridge is planned to connect the banks of the canal, reaching the Drie Fonteinen area. Both are part of a development masterplan for Vilvoorde.

There is already a hangar on the site, which will suitable to stock items and materials brought by customers, associations, and by the center’s home removal service. Recuperated metallic structures will be used to build the two additionnal buildings, which follow a dicreete and modest design and valorize the industrial heritage of the neighbourhood.

Opalis is a platform that helps connecting materials resellers to people interested in reusing materials. It gathers resellers from the entire Belgium, and also nearby resellers from adjacent countries. Here are some local companies likely to sell metallic structures to build the project. 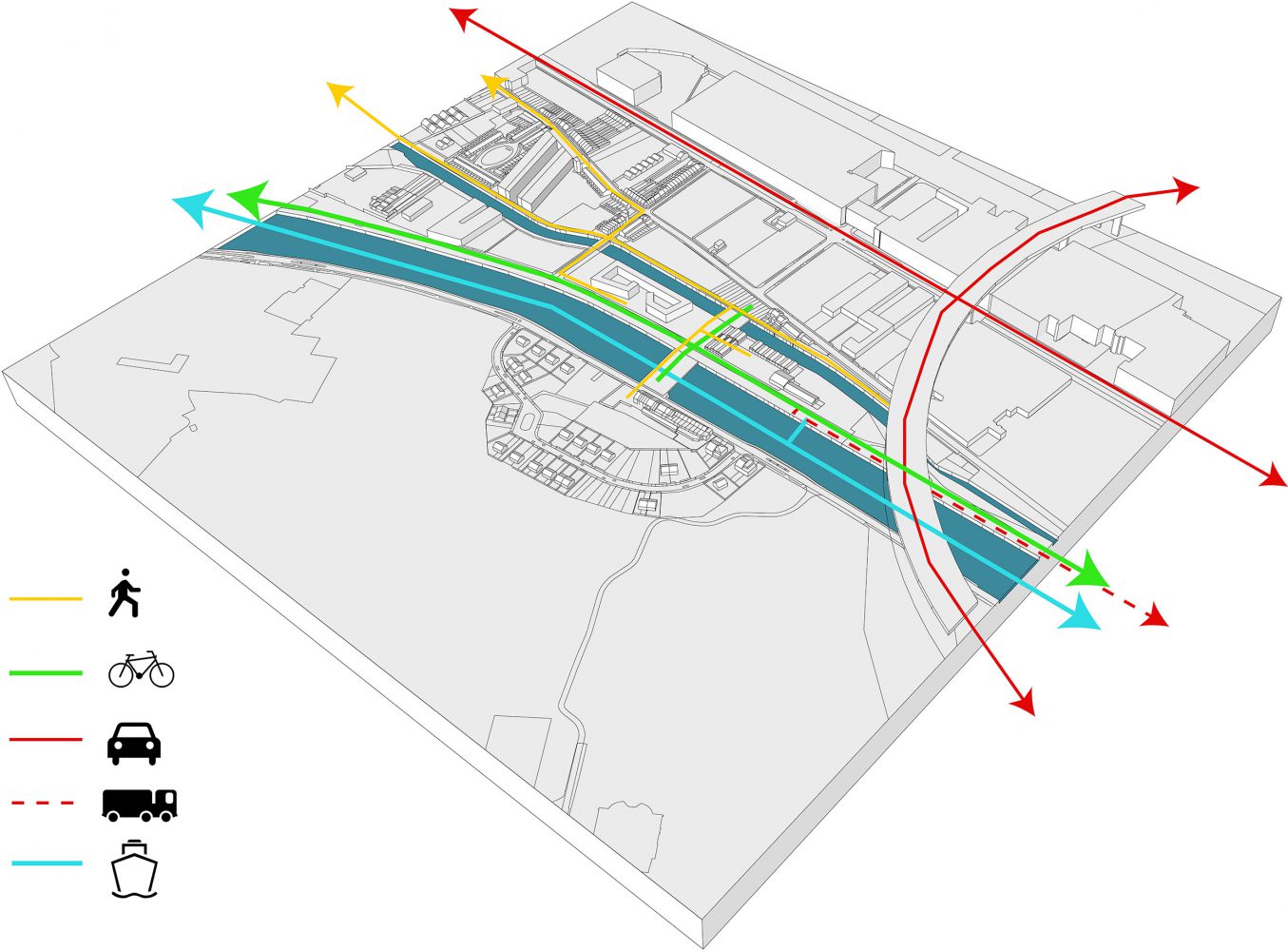 Access to the site will favor pedestrian visitors and slow mobilities, and preferably separate the occasionnal professionnal trucks, using the road along the Canal rather than coming through the neighbourhood.
Parking space will be limited in order to encourage a slow mobility logic for visitors, helped among other things by a home collecting and delivery service.

Long building in the down-right side :
Existing hangar. Depot-sorting station, library of materials and spare parts, with access to the limited road for accasional trucks.

Upper-left building :
Bike and limited car parking area, employees reunion room which can be rented for occasional seminars, and children daycare for visitors.

Down-left building : Café, and access to the temporary residence for invited designers, artisans, or mechanicals upstairs.